On 28th, June, 2017, the world-famous Mobile World Congress 2017 had its grand opening in Shanghai New International Expo Center (SNIEC). Hengtong Group, as a global information and energy network service provider well-known in China’s optical communication industry, brings its latest products and solutions in the submarine field, receiving wide attention of people from around the world. During the congress, Xu Rendong, General Manager of Hengtong Marine Cable Systems, accepted the interview of Network Telecom concerning the internationalization of its submarine cable and equipment systems. 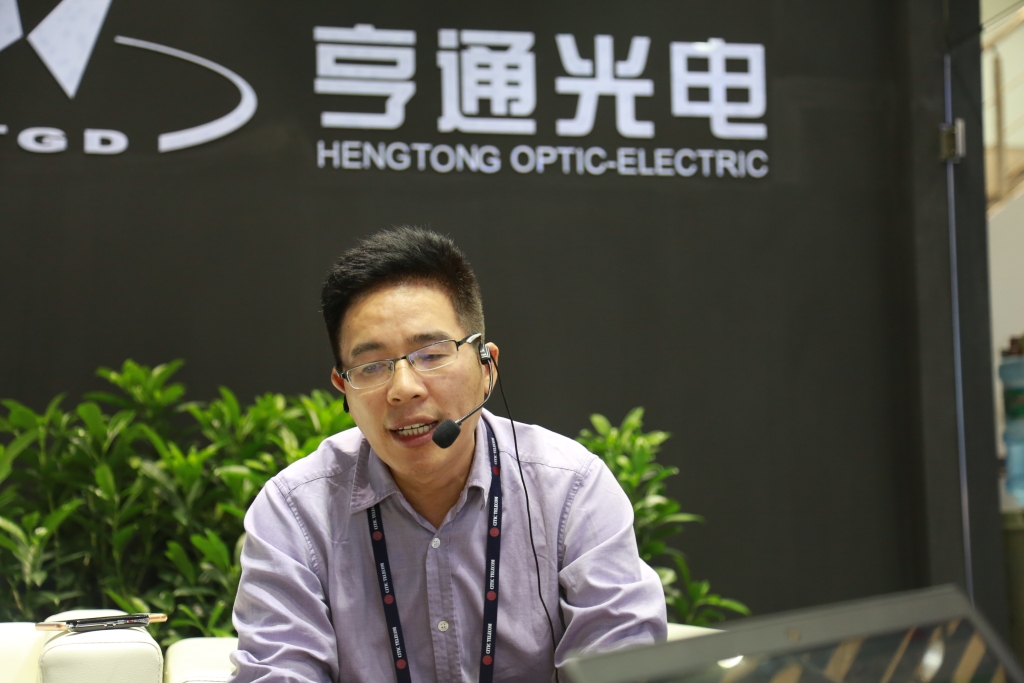 Photo: Mr. Xu, the General Manager of Hengtong Marine Cable Systems is giving an interview to journalists from Network Telecom.

Hengtong Marine spent a lot of efforts in building the international quality of its submarine cable and equipment system. To comply with Premier Li Keqiang’s proposal, that is, to transfer the world-renowned "Made in China" from "qualified manufacturing" into "good-quality manufacturing" and “competitive products manufacturing", Hengtong Marine strengthens its personnel’s’ concept of quality and strictly controls the product quality all along. As a result, it has got 26 certificates in the UJ, UQJ International Fiber optic cable product certifications, being the enterprise owning the largest number of certifications alike. For the scientific operation and management, Hengtong Marine puts forward the concept of “factory intelligent, management information, lean manufacturing”, which is called "Sanhua" construction, aiming at accelerating its pace of internationalization. When developing new products, Hengtong Marine uses internationally-advanced R&D and project management processes (IPD, PMP) as well as the computer simulation design. It so far owns a research and development team of 1 foreign expert from the “Thousand foreign experts plan” and 12 Ph.D. and 42 Master and people with senior titles, which embodies its strong scientific research ability both in the hardware and software.

Xu Rendong shows to the reporter the completion of a successful 5000-Meter-Deep unpeatered Cable Sea Trail completed by Hengtong Marine in May 2017. The sea test sees the first internationalized test carried out by Chinese submarine cable manufacturers. The with 43-year-experienced Captain David Foster, who is skilled at installing and repairing submarine cables, appraised Hengtong Marine for its good quality.

With the rapid development of the Internet, the global construction of submarine cable is also accelerating. So far, there are more than 230 submarine cables put into use around the world, connecting six continents except Antarctica. In addition, there are more than ten submarine optical cable lines under construction. After the specific "one belt, one road" planning officially settled, the Chinese cable manufacturers begin to get on the international stage and lay out the submarine optical cable business.

Hengtong Marine puts a lot of manpower, fund and resources in order to better implement  the ”Going-out” strategy. In hardware, Hengtong Marine constructs of a modern andthe largest scaleofsubmarine cable production basein China with an annual output of 15,000 km. The base has its own independent port  and is entitled to import and export. Its long-distance cross-ocean communication integration platform is divided into storage area and integrated area. The six cable pools in the storage area can store 6000KM deep sea submarine optical cable. And the design RPT storage volume of the integrated area is 120. Besides, Hengtong Marine has a world-class submarine cable and equipment testing center. As to talented personnel employment, Hengtong Marine creates an international talent echelon, with 1 foreign expert from the “Thousand foreign experts plan” and five foreign experts.

At present, Hengtong Marine’s pace of  “Going-out”  is accelerating and a number of projects have been applied in foreign countries. For example, the Maldives Project in 2016 produced a total of 1115 km of relay and non-relay submarine cable and createdthe longest single cable being 312 km long, which is also a world record. In 2016, Hengtong Marine provided 278 kilometers of non-relay cable for the Comoros Project. Belize project, the first submarine cable project in Central America, is 28 kilometers long, and also used Hengtong’s land cable.

Currently, Hengtong Marine is going out along the "One belt, one road" to testify the good quality of "Made in China" products.