Hengtong Cable Australia will be supplying 67km of 33kV and 32km of Bare Copper to the Kaban Green Power Hub in North Queensland.

Kaban Green Power Hub is located near Ravenshoe in the Atherton Tablelands, 80 km south-west of Cairns. Kaban Green Power Hub is an AU$373 million investment designed to generate clean, affordable energy and to strengthen the electricity network in Far North Queensland. The project consists of a 157 MW wind farm located near the town of Ravenshoe in the Atherton Tablelands and a 320 km transmission line upgrade from 132 kV to 275 kV of the North Queensland coastal circuit.

At Kaban there will be 28 wind turbines which will be 226m in height to the tip of the blade.

The 1,300-hectare site, which is on Jirrbal country and ranges over five freehold rural properties will have a relatively low visual impact on the surrounding community because it is surrounded on three sides by State Forests.

Lying at the northern fringe of the national network, Far North Queensland is in a weak part of the grid and doesn’t have many power generation plants, however once the 157 MW wind farm is operating it will help to improve the strength of the grid system, as well as generating clean, affordable energy for Queenslanders. 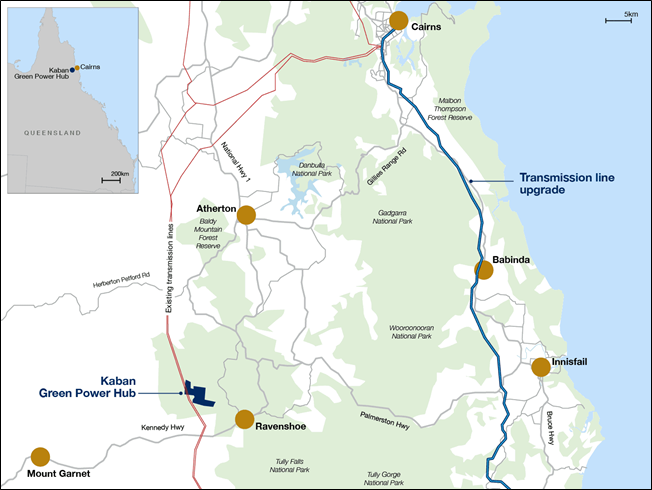